This past summer I had the honor of giving a presentation at the very first functional medicine conference in Poland, my birth country! The only problem? I haven’t given a presentation in Poland since the second grade, so as you can imagine, my language skills were a little rusty! I practiced my presentation for a few days to be sure I had the technical lingo down that doesn’t lend itself to my usual conversations in Polish, but a couple of opportunities to ad-lib presented themselves.

One of them was a reaction to a question about how to lose weight when someone is not eating much. I wanted to explain that women with Hashimoto’s often have problems with losing weight and battling excess weight even when their calorie intake is super low due to the metabolic implications of the condition. Hypothyroidism lowers our basal metabolic rate and thus our caloric requirement, meaning we could be eating and exercising just as much as our genetically identical twin without hypothyroidism but still be gaining weight!

I also wanted to share the devastating implications that women feel due to their impaired metabolism, so I decided to use a clever play on words and meant to say, “Women with Hashimoto’s may tell their doctors that they eat like birds but feel like whales!”

The conference attendees, (who were so gracious), at first looked at me confused, then started laughing hysterically.

Why were camels on my mind? One reason is because the words “whale” and camel” are similar in Polish “wieloryb” vs. “wielbłąd,” but the other reason is because later in the presentation, I shared the benefits of camel milk for people with thyroid and autoimmune disease.

If you’ve been following my work, you’ll know I’m a big proponent of removing dairy from the diet as you begin your healing journey. Dairy was a huge trigger for me and after removing dairy, my acid reflux, bloating, irritable bowel syndrome, and carpal tunnel disappeared, and I felt like a new person!

In fact, 80% of my clients and readers with Hashimoto’s feel better after removing dairy.

If you’re shocked by this information, you’re not alone. Many of us have been deceived into believing that cow’s milk is a health food, courtesy of our television sets and the marketing dollars of “Big Dairy.”

Hashimoto’s has truly been a part of my awakening to the world around me that has profited from my insecurities, much to my detriment.

I was never drawn to dairy as a child, but was compelled to start drinking it when I watched the deceitful “Milk Does a Body Good” commercials of skinny girls and boys that were “invisible” to the opposite sex. I was destroying my health because dairy marketers used a fear-based tactic to get me to buy their product. “Drink milk or you’ll be ugly and no one will love you.” How disgusting, right?

If dairy simply didn’t deliver on the promises of making me beautiful, I wouldn’t be as upset, but the fact is, dairy prevented me from living to my fullest on most days. The constant stomach aches made me shy away from physical activity, took my focus away from more important things, and made me disconnect with my body. I didn’t realize that it wasn’t normal to have stomach aches every single day until I went dairy free. Worst of all, dairy made me doubt my own power and intuition. After all, what did a little girl with a stomach ache know when the whole world said that dairy was healthy?

I am still on a continuing journey to recover my intuition and to understand the messages from my body. Healing is never a destination, rather an awakening of how we, as humans, respond to our environment. So even if you’ve hit a setback on your journey, keep moving and listening to what your body is trying to communicate to you in the moment. It could be sending you a message about food, a person, or an activity that is not agreeing with you. You just need to listen.

I’m so grateful for the internet and independent information getting out into the world. You see, no one sponsors or censors my writing. I have no ads on my website, and I am not indebted to any organization. I speak my truth so that you too can awaken your inner healer and get into a conversation with your body.

A part of the awakening can come from the food you choose to eat (or not to eat).

I can’t tell you what exactly is not working for you as an individual, but I hope I can guide you to make informed choices on what is likely to work in a person with Hashimoto’s based on my research, my experience, the experiences of my clients and colleagues, and the collective experience of the Hashimoto’s and autoimmune communities.

So Back to Camels – Why Have Animal Dairy at All?

Dairy free proponents will often say, “Milk is an excellent food for baby cows, but not for humans”. Using this same logic, you may be surprised that I would recommend another animal’s milk at all, especially when tasty options like almond milk or coconut milk are available.

If you’ve been following my work, you will know by now that Hashimoto’s is a combination of nutrient depletions, food sensitivities, chronic infections, intestinal permeability, impaired ability to handle toxins, and often an impaired stress response. People with Hashimoto’s usually have thyroid hormone imbalance, blood sugar imbalance, and an immune system imbalance as well!

I have found that camel milk does have some interesting healing properties that may be of use in helping to heal Hashimoto’s. In fact, the World Journal of Pharmaceutical Sciences published a review article of all of the medicinal properties of camel milk:

**Please note: The camel milk has to be raw and it can’t be boiled in order for it to retain many of these properties. Freezing does seem to retain all of the benefits. 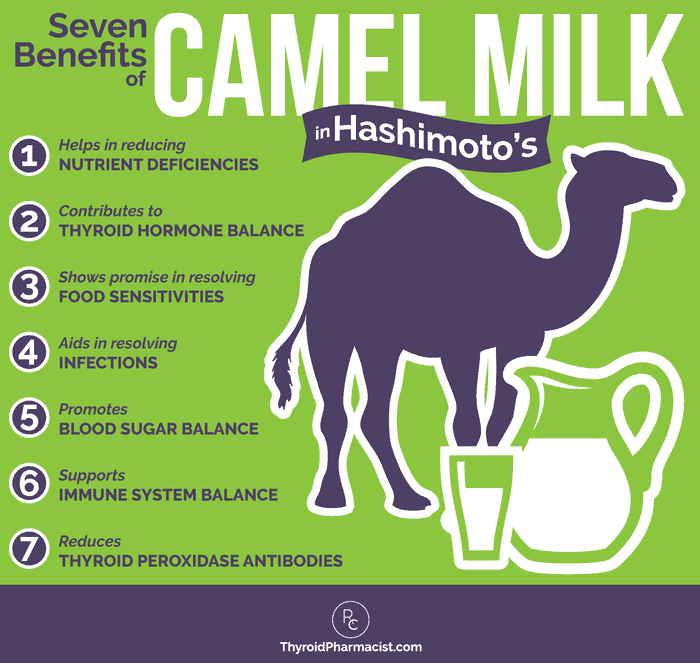 Furthermore, the allergy and sensitivity concerns that are seen with cow’s milk 10 are often absent in camel milk consumption. A study revealed people with cow milk sensitivity only showed an 18% cross-reaction to camel milk.11 Thus, at least 80% of those with cow’s dairy sensitivity will be able to tolerate camel milk.

I first learned about the use of camel milk from hearing about its benefits in the autism community in 2012. One mom of a child with autism wrote an entire case study of using camel milk to address her son’s autism symptoms.14

I used camel milk myself for a few weeks (it tastes like 2% skim milk). I do believe that camel milk helped me to lower the severity of my reaction to cow’s dairy.

Additionally, I also worked on cleaning out my gut and took systemic enzymes. I stopped drinking it because it became too difficult to source—until now!

I’ve also recommended it to many of my personal clients who have seen benefits in improved gut health, better energy, and reduced thyroid antibodies.

Here are some additional benefits reported by people who have used camel milk themselves or with loved ones in the autism and general autoimmune communities:

I have been hesitant in recommending camel milk on my blog because of the sourcing issue, until recently when I learned about Desert Farms, which ships camel milk to most of the United States. (In Europe, you can order from Desert Farms’ UK site or camel milk can be sourced from a Dutch farm.)

Are you planning on trying camel’s milk? Let me know how it works for you!

The information contained herein is for informational purposes only and should not be construed as medical advice. Please consult your physician for any health problems and before making any medical or lifestyle changes.