Many people with Hashimoto’s are often given nutrition advice by well-meaning people who intend to help them with their thyroid journey. Unfortunately, not everything you read and hear about supporting the thyroid with nutrition is true — some recommendations are simply myths that can be harmful or unnecessary!

One particular myth claims that those with thyroid conditions should not eat goitrogens. Goitrogens are substances that suppress the thyroid gland by interfering with thyroid hormone production, resulting in an enlargement of the thyroid known as a goiter.

Have you heard this before? This is only partially true, as all goitrogens are not created equally.

In this article, you’ll learn:

Delicious and healthy vegetables belonging to the cruciferous vegetables family are packed with nutrition. For example, cabbage, broccoli, cauliflower, kale, and turnips help increase detoxification in the liver, which is beneficial for individuals with autoimmune thyroid disease and impaired liver detox pathways. (For this reason, I love organic crucifers, especially kale, because kale’s hearty green leaves tend to pick up a lot of toxins from the environment.)

Unfortunately, they have gotten a bad rap due to some old nomenclature and outdated patterns in thyroid disease. These nutrient dense veggies that support the liver’s detoxification have also been identified as “goitrogens”.

The word “goitrogen” refers to any substance that has the potential to interfere with thyroid function. Goitrogens suppress the thyroid gland by suppressing the release of thyroid hormone, changing the way thyroid hormone gets produced in the body, and suppressing the absorption of iodine. As a compensatory mechanism, the thyroid will enlarge to counteract the reduced hormone production. This causes the formation of a goiter, also known as an enlarged thyroid gland.

Which Foods Are Goitrogens?

You may be surprised that some of your favorite greens, grains, and fruits are goitrogens. The following foods are all goitrogenic:

Not all goitrogens are created equally. Not all of them work in the same way. While it’s possible to be sensitive to anything, I like to look at research studies and clinical outcomes before I determine if a food is on the “No” list for Hashimoto’s.

The History Behind The Fear Surrounding Crucifers

Cruciferous vegetables in particular are considered to be “goitrogenic” because they have the potential to block iodine absorption. They contain glucosinolates, which are responsible for this action. Glucosinolates can prevent the absorption of iodine into the thyroid gland when consumed in large quantities.

Today, iodine excess is recognized as a risk factor for developing Hashimoto’s! (In cases of iodine excess, excess hydrogen peroxide can cause oxidative damage to the thyroid gland.) Furthermore, Hashimoto’s has become the primary reason for hypothyroidism, responsible for 90 to 97 percent of cases of hypothyroidism in the United States. (Read more about the history of the iodine-thyroid controversy in my article, here.)

Another reassuring fact to note is that you’d have to eat a lot of them for the goitrogenic effect to be a concern. Thus, eating cruciferous vegetables (unless a person is otherwise sensitive to them) is perfectly healthy for people with Hashimoto’s and should not impact thyroid function.

How Each Substance Acts As a Goitrogen

However, it’s important to note that not all goitrogens work in the same way. In the following chart, you can see how the agents of each food act as a goitrogen: 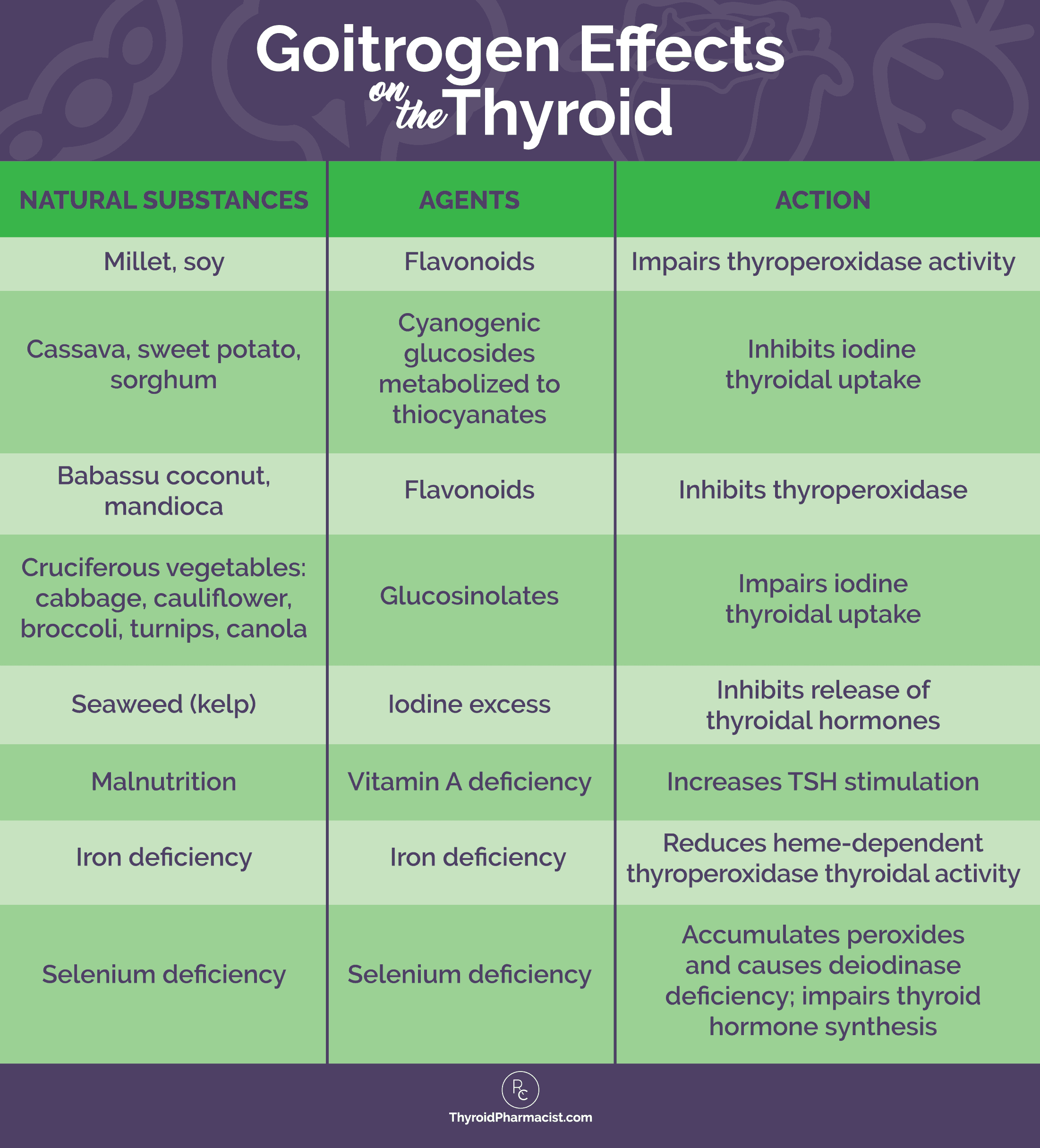 Note: Millet is a cereal crop that is not related to wheat, and it is often used in gluten free bread and bakery products. However, millet also contains isoflavones that inhibit thyroid peroxidase (TPO) and should be avoided by people with thyroid disorders.

Even in the case that a person does have hypothyroidism due to iodine deficiency, he/she can still enjoy crucifers as long as they are cooked or fermented, as they are only truly goitrogenic and affect the thyroid’s absorption of iodine in a raw state. Cooking or lightly steaming them will deactivate and break down the iodine-blocking glucosinolates, as will fermenting the vegetables (as in sauerkraut).

The Exceptions: Soy and Canola

While I generally don’t recommend the avoidance of goitrogenic cruciferous vegetables, there there are two goitrogenic foods that I do always recommend avoiding with Hashimoto’s, and they are soy and canola.

Soy is a goitrogen that blocks the activity of the TPO enzyme. As such, it has been linked to the development of autoimmune thyroiditis.

A study conducted in 2006 suggested that by inhibiting absorption, soy may increase the dose of thyroid hormone required by hypothyroid patients. Furthermore, it highlighted a concern based on in vitro and animal data that those with low iodine uptake or compromised thyroid function may increase their risk of developing clinical hypothyroidism with the ingestion of soy-containing foods.

The study recommended that those who eat soy should ensure their iodine intake is adequate. However, as I mentioned above, excess iodine may exacerbate Hashimoto’s.

Additionally, soy may have indirect deleterious effects on the thyroid as well. Soy is often highly processed and American soy is likely to be genetically modified. Some researchers believe that processing and genetic modification may make foods more reactive. I don’t have any specific studies to back up this claim, however, soy protein is a common IgG reactive substance, much like gluten and dairy. In fact, it’s one of the most common reactive foods in people with Hashimoto’s. For this reason, people with underactive thyroid function and Hashimoto’s should eliminate soy from their diet. I often see people with increased anxiety and increased thyroid antibodies due to consuming soy.

In 2015, I conducted a survey of 2,332 readers with Hashimoto’s. 63 percent said they felt better after removing soy, and 34 percent reported a reduction in thyroid antibodies after doing so. On a personal note, I have suffered from a “soy crash”, feeling drained and exhausted the day after eating soy. I feel much better without it, and you may too!

Canola is another goitrogen that should be avoided in all individuals with Hashimoto’s, as it is highly processed and made from genetically modified crops. The most common source of its consumption is canola oil. It’s obtained from Canola (did you know that the name Canola comes from “Canadian oil”?), which is a variety of rapeseed.

Substitutes for Soy and Canola Oil

To replace soy and canola oil from your pantry, I highly recommend coconut oil, as it is a better alternative that contains healthy fats. Coconut oil is antimicrobial, antiparasitic, antiviral and antibiotic, and can help with weight issues. I find most people with Hashimoto’s can tolerate it.

I also recommend extra virgin olive oil. Studies have shown that extra virgin olive oil lowers “bad” cholesterol, cuts your risk of heart disease and stroke, and can lower blood pressure. It can also reduce inflammation, enable calcium in your food to be better absorbed into your bones, and regulate your immune system, as it’s loaded with antioxidants and polyphenols. Moreover, as a healthy fat, it helps to keep you feeling full longer after meals.

However, I avoid buying olive oil in stores, where the oils can sit on the shelf for months, growing stale, musty, and eventually rancid. Some may even be adulterated with added peanut or canola oils to cut costs! So, I recently became a member of the Fresh-Pressed Olive Oil Club, and now it’s my new favorite way to get pure, unadulterated extra virgin olive oil delivered to my doorstep. (They deliver three bottles to my home, four times a year. One bottle lasts one month, so I can have the freshest extra virgin olive oil on hand for every month of the year.) If this sounds like something you’d be interested in joining, you can try a FREE retail-size bottle of their artisan oil, valued at $39, for just $1, to help cover shipping! Click here for more details.

Why Am I Still Reacting To Crucifers?

Goitrogenic vegetables, except for soy and canola, are generally safe for consumption. That said, some people may not tolerate certain crucifers like broccoli, due to their gassy nature.

There may be other reasons, however, for why someone may be reacting to cruciferous vegetables.

SIBO, or Small Intestinal Bacterial Overgrowth, is an overgrowth of bacteria in the small intestine that is present in up to 50 percent of people with hypothyroidism. This condition can be a trigger for intestinal permeability and can be a root cause or exacerbating factor for Hashimoto’s.

SIBO can be exacerbated by eating foods that contain FODMAPs (Fermentable Oligosaccharides, Disaccharides, Monosaccharides and Polyols). Some cruciferous vegetables like cauliflower tend to be considered high FODMAP foods, which means they may contain molecules that are not always easily absorbed by everyone. 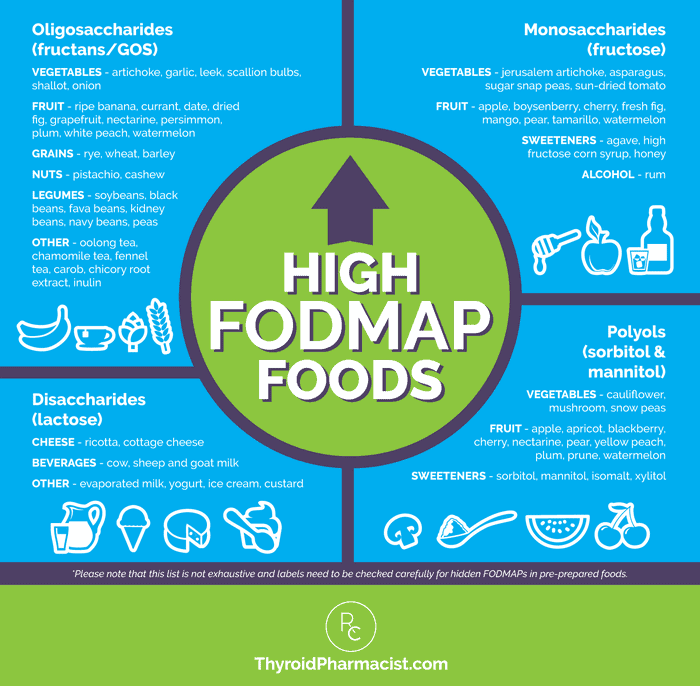 If SIBO is not eradicated, a person can be sensitive to whatever foods he/or she is eating. If you suspect SIBO to be at play in your body, be sure to get tested for gut infections ASAP, so you don’t run the risk of losing more foods.

You can view all of the tests I recommend in my article on SIBO. You can also find SIBO protocols in in my new book Hashimoto’s Protocol, which explores SIBO in greater detail.

Some people with Hashimoto’s may also be reactive to sulfurs, which are naturally found in high amounts in cruciferous vegetables.

I have found that individuals with CBS gene mutations are more likely to have sulfur sensitivity. In some cases, sulfur toxicity or sensitivity may also be present in people with mercury toxicity, and some of my clients have reported this reaction after treatment with DMSA or high doses of N-Acetyl Cysteine. Symptoms of sulfur toxicity include reactions like skin rashes, breakouts, and skin dryness after eating sulfur-rich foods such as eggs and garlic.

Sulfur requires specific protocols to encourage elimination. Here are some tips to help with sulfur sensitivity:

If you suspect that you may have a CBS gene mutation and/or a sulfur sensitivity, be sure to test for the CBS gene mutation using a genetic test like the one offered by 23andMe, as well as check out the Sulfur Toxicity Protocol in the Advanced Protocols section of Hashimoto’s Protocol.

I hope this article has debunked the myth surrounding goitrogens. There are certain goitrogenic mechanisms that I am extremely cautious around and recommend avoiding, like millet, soy and iodine excess, which inhibit the thyroid peroxidase enzyme and thyroid hormone release. That said, kale, broccoli, and other goitrogens (with the exception of soy and canola) are wonderful greens and foods that help our bodies to detoxify!

Remember, most cruciferous vegetables and goitrogen-containing foods are safe for those with Hashimoto’s. However, if you seem to react to them, you may wish to look into SIBO, sulfur sensitivity, iodine deficiency and the CBS gene mutation.

I wish you all the best in your healing journey!

P.S. If you’re looking for a diet that can be beneficial for Hashimoto’s, download my FREE 2-week AIP recipe plan.

P.P.S. You can also download a free Thyroid Diet Guide, 10 Thyroid friendly recipes, and the Nutrient Depletions and Digestion chapter for free by signing up for my newsletter. You will also receive occasional updates about new research, resources, giveaways and helpful information.