Many of my readers have reported some of the following symptoms: brittle or white-spotted nails, a tendency to get sick easily, allergies, frequent respiratory infections, an impaired sense of taste and smell, diarrhea, hair loss, impotence, loss of appetite, skin issues, depression, and impaired vision. Are you one of them? Figuring out the root causes of your Hashimoto’s-related symptoms can be challenging and overwhelming. After all, many symptoms overlap with several other conditions. But, the origin of these symptoms doesn’t have to be a mystery. Often, these symptoms stem from a deficiency in an essential trace element: zinc.

One in four individuals in the general population may be zinc deficient, including most people with hypothyroidism and Hashimoto’s. Furthermore, an estimated 17 percent of the worldwide population is at risk of inadequate zinc intake.

Zinc is involved as a catalyst in many different pathways in the body. It’s also very important for gut health, immune function, tissue healing, the conversion of T4 to T3, and the production of TSH. It can help tighten the intestinal junctions of those with intestinal permeability as well. For this reason, increasing your zinc levels may help reduce your symptoms and even lead you towards remission!

In the following article, you’ll discover:

Zinc is considered an essential trace element, which means that small amounts are important to our well-being. After all, it acts as a catalyst in about a hundred different enzyme reactions required by our body, and is involved in DNA synthesis, immune function, protein synthesis, and cell division. Adequate levels of zinc are required for proper sense of taste and smell, detoxification, and wound healing.

Zinc also plays a specific role in gut health. In fact, zinc deficiency has been associated with increased intestinal permeability and susceptibility to infections, which are common triggers of Hashimoto’s, as well as reduced detoxification of bacterial toxins. Replenishing zinc has been shown to help to tighten the intestinal walls and repair intestinal permeability in other conditions such as Crohn’s disease.

In addition, zinc helps to prevent oxidative stress, which could otherwise knock your body’s antioxidant levels out of balance and damage your DNA.

Zinc is also an essential element for thyroid function.

A depletion in zinc prevents the conversion of the T4 hormone into the active T3 version. This could lead to symptoms like hair loss, fatigue, and weight gain, even while taking thyroid medications like Synthroid. You can read more about the effects of insufficient T3 levels here.

Zinc is also needed to form TSH, which is why those with hypothyroidism and who are constantly producing TSH are more likely to develop deficiencies in this important mineral.

When taken with selenium, (another nutrient that has been proven to be beneficial for those with Hashimoto’s), zinc has been shown to improve thyroid function.

In 2015, a study was conducted with 68 overweight or obese female hypothyroid patients who received either a zinc supplement, a selenium supplement, placebo pills, or both zinc and selenium supplements taken together. Three months later, it was noted that those taking both zinc and selenium, as well as those just taking zinc supplements, saw a significant increase in their free T3 levels. Those taking both zinc and selenium experienced a significant decrease in their TSH and an increase in T4 levels. The study concluded that zinc, when taken alone as well as in combination with selenium, can have a positive effect on thyroid function in overweight or obese patients with hypothyroidism.

The benefits of zinc supplementation in thyroid patients were also confirmed when I surveyed over 2000 of my readers and asked them what interventions worked for them. Fifty-two percent of them said taking a daily dose of 30mg of zinc made them feel better. Furthermore, 58 percent said they saw an improvement in energy, 48 percent in their mood, 30 percent in their lab results, and 25 percent in skin changes.

Could you be at risk? I’ve created a handy Zinc Screen to help you determine whether or not you may be at risk for zinc deficiency. Give yourself 1 point for every symptom you have, then count up your total score: 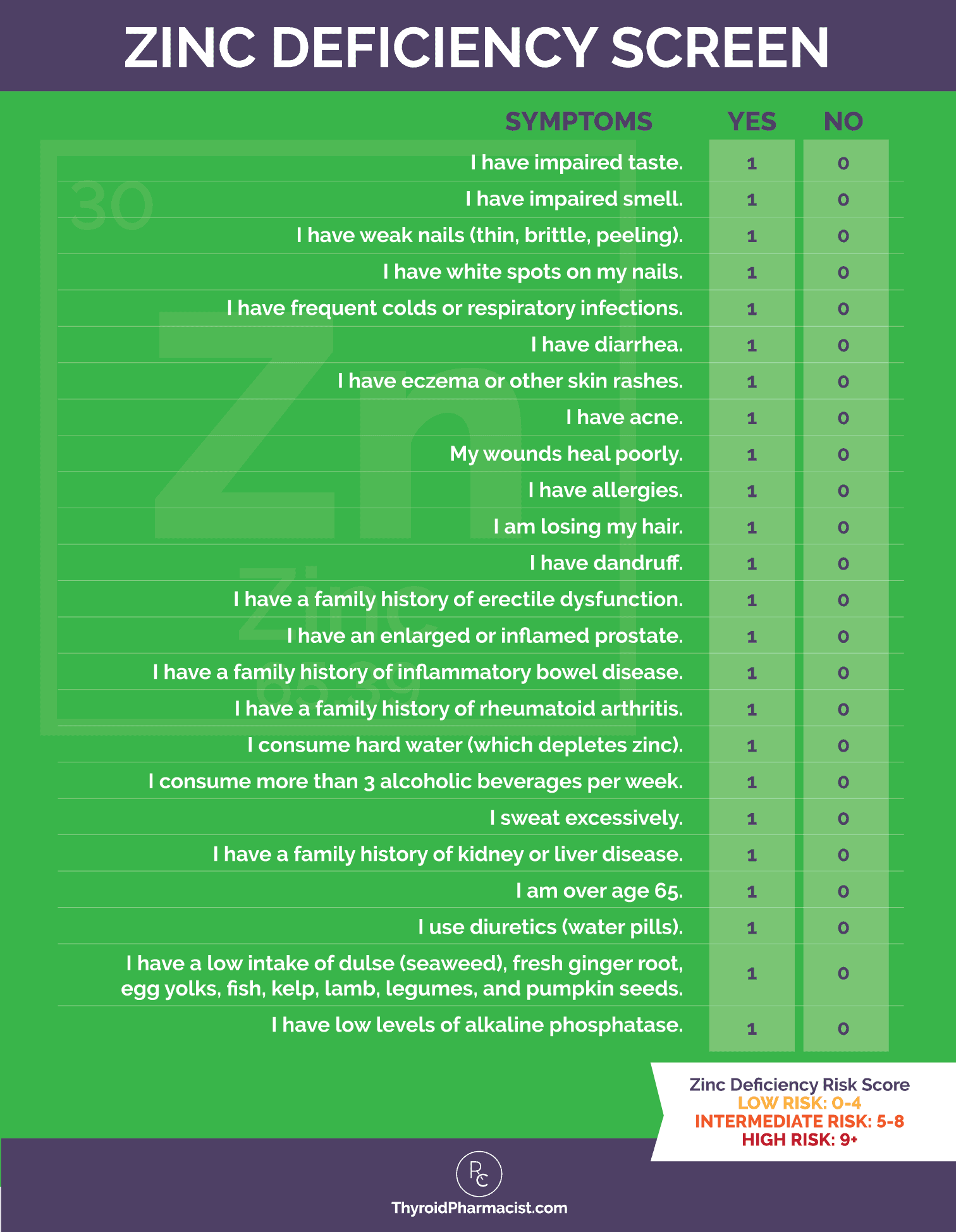 It’s important to be familiar with the many other factors that can deplete one’s zinc levels, many of which are also common co-occurring conditions in those with Hashimoto’s. Possible causes of zinc depletion include:

Testing for zinc can be done through a standard blood test ordered by your practitioner. However, it’s important to note that some blood tests may not be accurate, as they do not indicate the level of cellular zinc. Additionally, signs and symptoms of zinc deficiency can be present, despite normal lab results.

As such, a liver function blood test may help to identify a zinc deficiency, which will present as low alkaline phosphatase (ALP) levels. (The optimal range for this enzyme is 70 to 90 IU/L). The Comprehensive Metabolic Panel by Ulta Lab Tests can check your alkaline phosphatase levels, as well as other markers related to liver health.

Advanced testing for vitamin and mineral deficiencies can also be done to help determine your body’s zinc levels. The SpectraCell Laboratories Micronutrient Test is a great option to consider, as it will check for multiple other nutrient deficiencies as well, including: vitamin A, vitamin B1, vitamin B2, vitamin B3, vitamin B6, vitamin B12, biotin, folate, vitamin C, vitamin D, vitamin K, calcium, magnesium, manganese, copper, selenium, vitamin E, and more!

(Interested in learning about other common nutrient deficiencies in those with Hashimoto’s? Check out my FREE eBook, Supplements to Subdue Symptoms.)

Zinc can be found in food. Oysters have the highest concentration of zinc, but they are not typically considered an everyday food. Beef, liver, pork, lobster, and chicken are the next richest dietary sources of zinc, as it is easier to extract zinc from meat than from non-meat sources. (This explains why vegetarians also have an increased risk of zinc deficiency.)

Avoiding the consumption of alcohol, refined sugar, white flour, rice, and oxalate-rich foods, which are zinc-depleting foods, may also help you with zinc extraction.

Nonetheless, since zinc is not stored in the body, those with zinc deficiency, Hashimoto’s and other autoimmune conditions may want to consider zinc supplementation as part of their everyday regimen.

To address a deficiency in zinc, supplements may be utilized. However, I don’t like recommending one-a-day-type vitamins because they don’t consider how the vitamins interact with one another.

For example, vitamin C taken with iron improves the absorption of iron, while iron taken with zinc decreases the absorption of zinc. Thus, providing just the recommended dietary allowance (RDA) of zinc when only 50 percent of it will be absorbed is not effective in overcoming a severe zinc deficiency. Some vitamins and minerals need to be taken with food to promote absorption; others, on an empty stomach.

Furthermore, not all supplemental zinc formulations are created equally. I prefer the zinc picolinate version, such as the one made by Pure Encapsulations, because it is absorbed better.

I usually recommend doses of no more than 30 mg per day, unless you’re working with a practitioner who advises higher doses. To ensure proper absorption, zinc supplements should be taken with food.

Doses should be no more than 30 mg per day without your doctor’s supervision. This is because doses above 40 mg may cause a depletion in copper levels. Zinc supplementation can also deplete one’s iron levels.

In fact, in one study, taking 50 mg of zinc taken over ten weeks led to depletions in both copper and iron.

This may be beneficial in some cases, where one is copper toxic. If your alkaline phosphatase levels do not change despite starting zinc supplementation, this may indicate that there is an underlying case of copper toxicity that may need to be addressed. (For more information on having high levels of copper, check out the section on copper toxicity and the Copper Detox Diet in my new book Hashimoto’s Protocol.)

In other cases, however, taking too much zinc can produce a copper deficiency, and you may need to take supplemental copper. Symptoms of copper deficiency include anemia not responsive to iron supplementation, trouble with walking and balance, fatigue, and lightheadedness.

Please refer to your medical practitioner if you suspect you will need a copper supplement in addition to zinc, or if you may be at risk for abnormal copper levels.

The Takeaway and Next Steps

Zinc is a vitally important nutrient, playing a key role in over one hundred functions in your body, including proper immune system function, intestinal wall repairs, and tissue healing.

It also plays a vital role in TSH production and the conversion of T4 to T3. Depleted zinc levels, which are common in those with Hashimoto’s, can be the root cause of many of your symptoms, including poor wound healing, impaired taste and smell, thin, brittle, peeling, or white-spotted nails, a weakened immune system, allergies, frequent colds and respiratory infections, diarrhea, unexplained weight loss, a lack of alertness, and open sores on the skin. If any of these sound familiar, think about zinc!

As many causes of zinc depletion are common co-occuring conditions in those with Hashimoto’s, increasing your zinc levels may help reduce your symptoms and put your autoimmune thyroid condition into remission.

While you can absorb zinc from dietary sources, it’s important to remember that zinc is not stored in the body, so I recommend adding a zinc picolinate supplement to your daily regimen to boost and maintain your zinc levels. You may also consider taking it with evening primrose oil for better absorption. Again, if your zinc levels do not improve after starting supplementation, you may wish to consider looking into whether you have copper toxicity.

I hope this brings you one step closer to putting together the puzzle pieces of your symptoms. Remember, every effort spent towards optimizing your health is a step towards getting and feeling better. I wish you all the best on your healing journey!

P.S. You can also download a free Thyroid Diet Guide, 10 Thyroid friendly recipes, and the Nutrient Depletions and Digestion chapter for free by going to www.thyroidpharmacist.com/gift. You will also receive occasional updates about new research, resources, giveaways and helpful information.