I love the concept of using food as medicine, or as I like to call it, food pharmacology, to heal the body.

I became a pharmacist because I was interested in the effect that different substances have on human physiology. Medications are an obvious example of how tiny substances can produce a tremendous change in the human body, but what’s even more intriguing to me is the profound effect that foods and natural substances can have on the body. I am always fascinated by how we can incorporate the healing properties of food into our everyday lives.

“Pharmacognosy” is the term we use for the study of medicines derived from natural sources, and the spice turmeric has received a lot of attention as a potential source of medicine, due to its healing properties.

Turmeric can be helpful in reducing whole body inflammation, healing the gut, as well as detoxifying from heavy metals, in those with autoimmunity and Hashimoto’s.

In this article, I’ll explore:

Turmeric, whose botanical name is Curcuma longa, is a plant of the ginger family that was first cultivated in India and Indonesia. Going back millennia, turmeric has been an important part of Indian cooking, medicine, and religious practice. To this day, it is commonly used in Indian and Pakistani cuisine, and curries around the globe.

Though we often think of turmeric as the spice that gives curry its characteristic golden color, this plant has an equally long history of medicinal use. Historically, turmeric has been used to treat pain, as well as stomach and liver ailments. Topically, turmeric was used to help with treating many skin conditions, including healing sores, eczema and skin rashes.

To this day, turmeric is viewed as a sacred substance in much of Indian culture and is an important part of Ayurvedic medicine – an ancient Indian system of natural healing that is still practiced today.

Benefits and Uses of Curcumin

Many recent studies have backed up the ancient claims of the medicinal benefits of turmeric. This is mostly due to compounds called curcuminoids, the most important of which is curcumin, which has powerful anti-inflammatory effects and is a strong antioxidant.

Some of the studied uses of curcumin include:

Because of its ability to reduce inflammation and oxidation — factors that play a huge role in many diseases, and aging itself — curcumin may be helpful in preventing or treating a wide range of conditions. It’s no wonder this substance has been revered for thousands of years!

Excess inflammation is always present in Hashimoto’s thyroiditis (the suffix “itis” denotes inflammation in the thyroid gland), and intestinal permeability has been found as a common factor in every case of autoimmunity. In some cases, people with Hashimoto’s may also have heavy metal toxicity.

Curcumin, the most studied active ingredient in turmeric, has been shown to have anti-inflammatory, antioxidant, antibacterial, and antiviral activity, all of which can provide benefits to those suffering from Hashimoto’s-related symptoms. 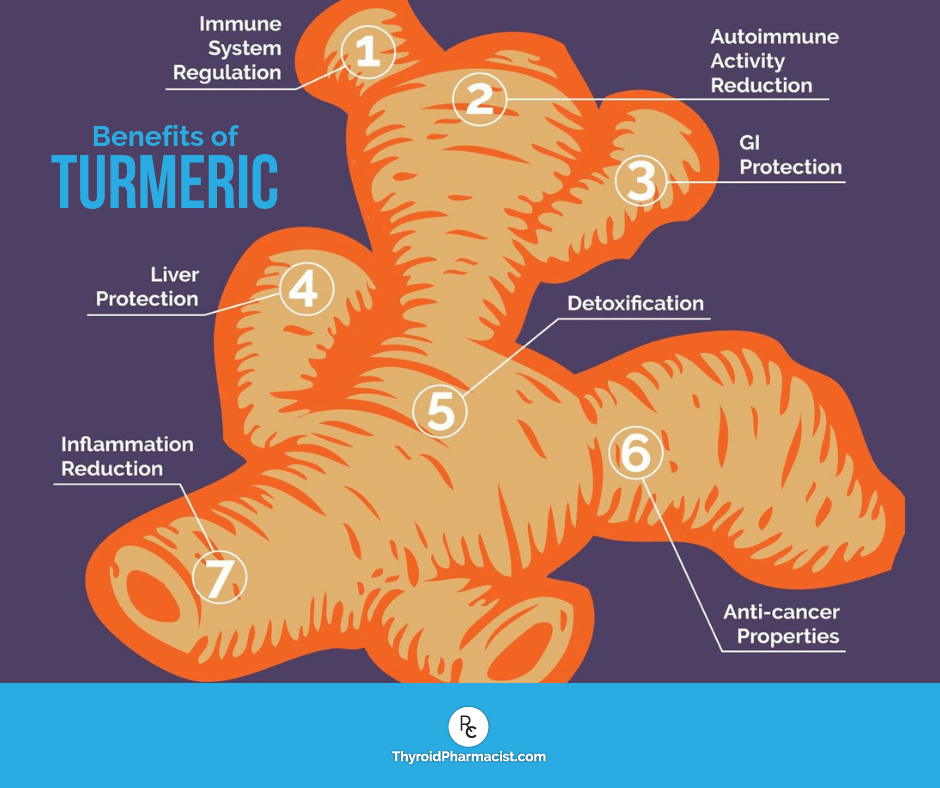 Studies on the Effects of Curcumin

Multiple studies that have examined the effect of curcumin on the thyroid gland and autoimmunity have shown encouraging results, including:

In my survey of 2232 people with Hashimoto’s, 680 people reported that they had tried curcumin. Fifty six percent reported that it was helpful, 40 percent did not see a change in how they felt, while 3 percent said it made them feel worse.

When asked about the specific benefits seen from the use of turmeric, 64 percent of people reported that it helped them with reducing pain symptoms. Other positive benefits were an increase in energy (seen in 35 percent), improvement in mood (seen in 34 percent), and an improvement in thyroid antibodies (12.5 percent).

Pain is the most obvious manifestation of inflammation in the body, so I’m not surprised that those who had pain saw an improvement with curcumin use. While most people with Hashimoto’s do have inflammation, only some will present with pain symptoms. Poor energy, mood changes, and thyroid antibodies are also indicative of inflammation, and it was encouraging to see that curcumin also impacted those parameters, but it should be noted that improvements in those symptoms may be less obvious to notice, and may also take a bit longer to manifest.

While curcumin can also boost glutathione (an antioxidant that’s often depleted in Hashimoto’s), reduce inflammation, help with healing the gut, and detoxifying from heavy metals, it’s difficult to assess these improvements symptomatically.

Although most people with Hashimoto’s will benefit from the addition of turmeric, if you are currently experiencing pain, you will most likely see the most benefit.

How to Use Turmeric/Curcumin

Some researchers have suggested that the daily intake of curcumin in a typical Indian diet may be anti-inflammatory. However, curcumin is cleared from the body within about an hour, and may not remain present in the body long enough to produce those anti-inflammatory effects. Fortunately, there’s a hack for that! Combining curcumin with piperine, an alkaloid found in black pepper, extends the life of curcumin in the body, helping it to stick around longer.

My recommendation is to add more turmeric to your cooking (remember to add some pepper to the mix), as well as a high-quality curcumin supplement. Be sure that the supplement you’re taking either combines curcumin with piperine, or uses a suspended release technology to help the curcumin stick around in the body. Curcumin appears to be extremely safe, even at doses of up to 8 grams/day.

While piperine does increase the absorbance of curcumin, some people who are sensitive to black pepper may react to it. While black pepper is technically considered Autoimmune Paleo friendly, it’s also considered a “suspect” spice, due to potential reactions.

Fortunately, I’ve been able to develop a new supplement that could be an ideal alternative for those who don’t tolerate piperine but still want to incorporate curcumin into their routine.

The potential health benefits of curcumin are often limited by its poor solubility, low absorption from the gut, rapid metabolism and rapid systemic elimination. Curcumin Absorb is manufactured using an all-natural formulation that improves the absorption and delivery of curcumin. This process uses a proprietary blend of MCT oils, lecithin, and vitamin E, without the use of potentially harmful surfactants, increasing the absorption rate. None of the ingredients have been derived from soy.

For those that aren’t sensitive to piperine, an alternative supplement that I have personally used is called Curcumin with Bioperine. It is free of gluten, dairy, and soy. The dosage I used when working to detox my body of arsenic was 500 mg, three times per day.

Below are two of my favorite ways to add more turmeric to my diet. A few years ago, I found myself suffering from arsenic poisoning (yikes!) and used curcumin to detoxify my body. Along with taking a curcumin supplement, I also made Turmeric Tea twice per day, and ate my Tandoori Chicken multiple times per week. I believe that the addition of turmeric helped me clear out the arsenic within a month, and helped me to prevent long-term damage! 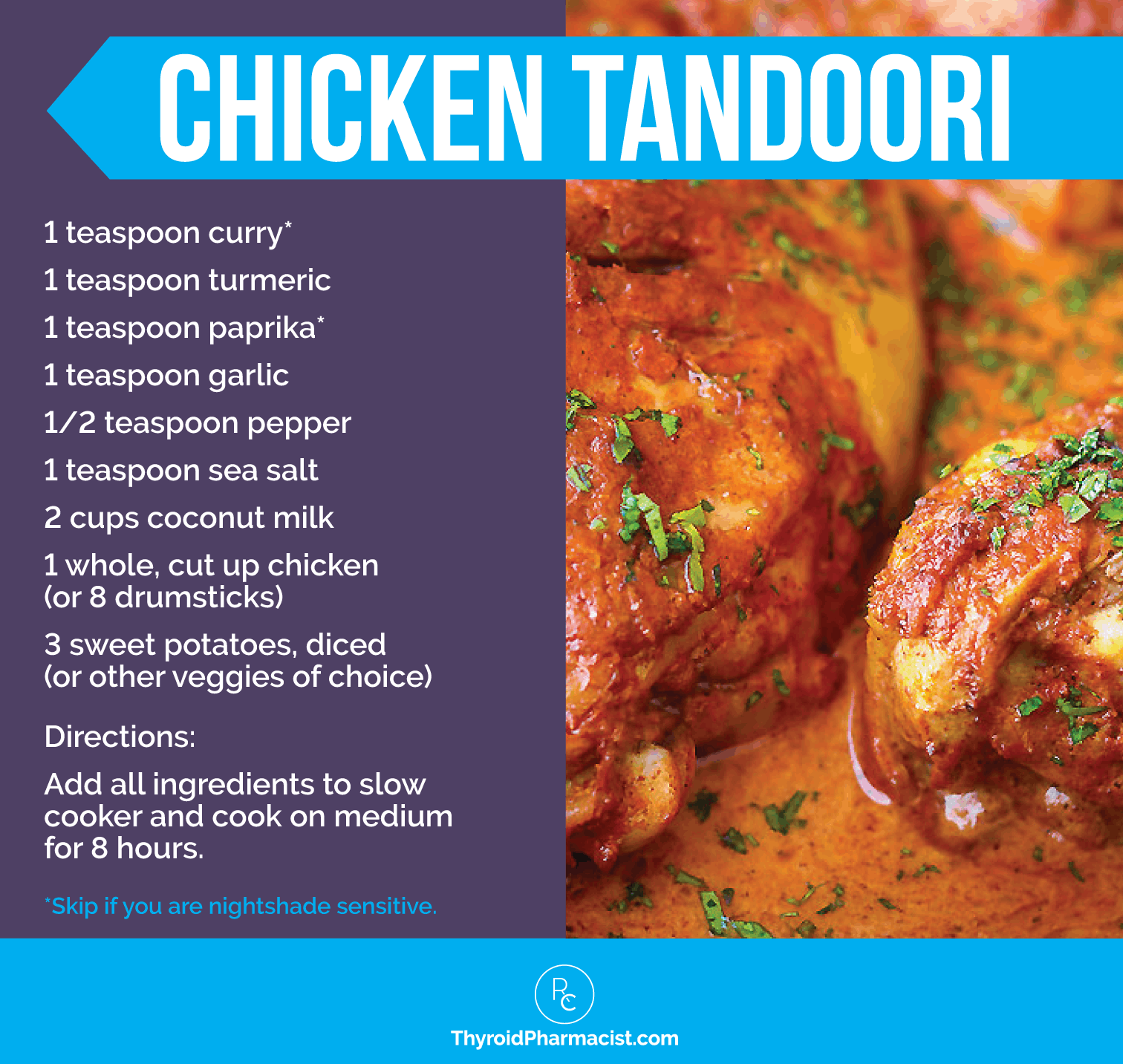 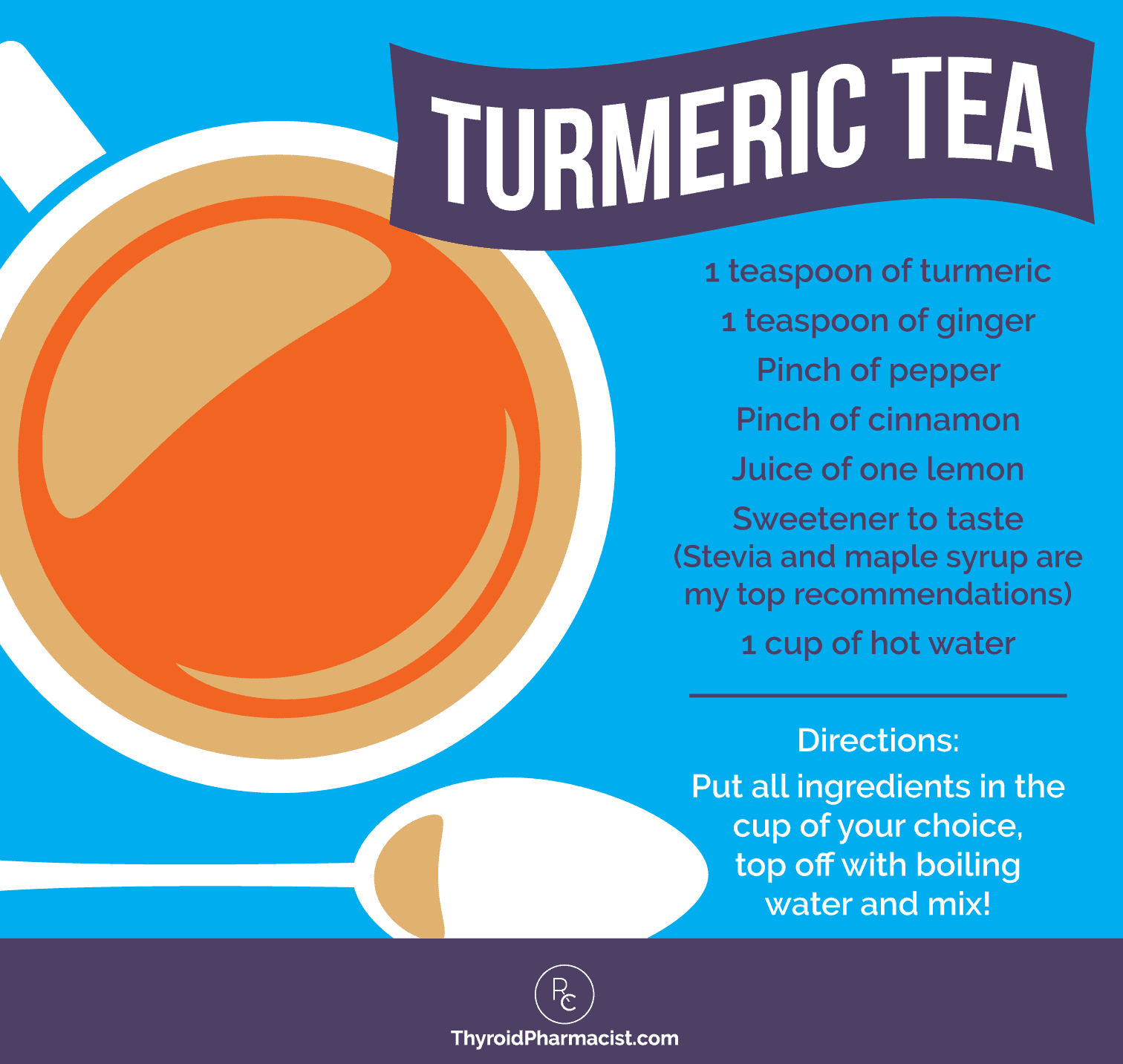 While most people can safely use turmeric/curcumin, there are a few exceptions that should be noted. People using blood thinners should avoid curcumin, as it can magnify the effects of anti-clotting medications. While this interaction has not been well studied, there have been reports of excess bleeding by people combining cucurmin with anti-coagulants.

There have been additional reports of iron levels dropping in certain individuals who were taking a turmeric supplement, and returning to normal once the supplement was stopped. While studies in mice have shown a correlation between curcumin and lowered iron levels, these results have never been duplicated in human studies. Nevertheless, people with anemia or low iron levels should consult with their doctor, and monitor their ferritin levels carefully, before using a turmeric or curcumin supplement.

Studies have shown that taking doses of 1,200 – 2,100 mg of curcumin per day for two to six weeks didn’t lead to any apparent adverse effects. However, a few negative side effects have been noted by a small portion of people taking curcumin supplements at higher dosages. Digestive issues have been reported at daily doses exceeding 1,000 mg; headaches and nausea have been noted in a small number of people at dosages over 450 mg; and skin rashes have been seen in a few rare instances of people taking curcumin at dosages of 8,000 mg.

Not all turmeric supplements are pure, and may contain fillers, including wheat, barley or rye flour — sources of gluten that can be particularly harmful for those with Hashimoto’s. Some turmeric powders have also been found to contain high levels of lead and a food colorant called metanil yellow that may cause cancer and neurological damage when consumed in large quantities. Therefore, finding a reputable source of turmeric is crucial!

Turmeric is a powerful ingredient with both a long history of use, and exciting new research showing the positive effects it can have on the body.

My personal experience has shown the benefits it can have for detoxifying the body, and I often recommend it for clients with Hashimoto’s to support the gut, liver, and inflammatory pathways, especially if they are experiencing pain!

I hope this information helps you on your journey!

P.S. You can download a free Thyroid Diet Guide, 10 thyroid-friendly recipes, and the Nutrient Depletions and Digestion chapter for free by signing up for my newsletter. You will also receive occasional updates about new research, resources, giveaways and helpful information.

Note: Originally published in July 2015, this article has been revised and updated for accuracy and thoroughness.