You have to be willing to change 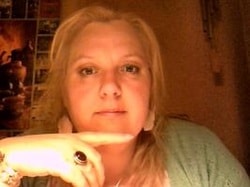 Dorthea is a 47-year young woman. She has an amazing spirit and presence, and I hope that her story will inspire you on taking on lifestyle changes that can help you.

Dorthea had always been very health conscious and followed a vegetarian diet for 25 years and exercised, but found that she kept gaining weight that she couldn’t lose for almost 10 years.

“I thought I was doing everything right by eating a vegetarian diet.”

Although she was trained as a nurse and a naturopath, she did not suspect thyroid disease, and instead focused on exercise and restricting her caloric intake to lose weight… basically doing the standard things that we think we should be doing.

Dorthea was finally diagnosed with Hashimoto’s in January 2012 after a series of really stressful events in her life.  The stress started in 2009 when she had to move her home and business and opened up a new shop selling organic hair and personal care products. The following year, she got into a car accident, her new home was robbed,  and she had to close her shop due to the economic recession!  She was forced to find a new home and put down several of her beloved cats due to sickness from polluted water in the former home. As you can imagine, all this stress had a tremendous effect on her. She was burned out, had a physical and emotional breakdown and collapsed.

After all of these stresses, she developed new-onset anxiety, panic attacks, and social phobia. She suspected she had post-traumatic stress disorder and was offered anxiety pills. However, she knew that she was unwell and pressed for further blood tests.

It was a really good thing that she did. Her TPO antibodies were between 5000-6000 kU/L when she was finally tested- (the normal range is <35 kU/L) and a range of above 500 is considered aggressive. Her TSH was at 16 mIU/mL (normal TSH for a person without thyroid disease should be under 3 mIU/mL).

She was given Eltroxin (the T4 medication available in Denmark, where Dorthea lives). She was on this medication from January to June 2012 but kept getting worse. Her TSH jumped to 26 mIU/mL—even on medication. She had brain fog, lost half of her hair, had muscle tremors, and her social phobia worsened.

Like many of us, she turned to the internet and started to investigate Hashimoto’s.

She changed her diet to be free of gluten, dairy, goitrogens, nightshades, and eggs and completed a liver detox. She also started taking Ayurvedic adaptogenic herbs like Ashwagandha and Boswellia and began to use the anti-inflammatory herbs ginger and curcumin.  At first, these interventions seemed to help, but every time she took her medications she felt worse –she suspected that this was because she had always been very sensitive to chemicals.

In July of 2012, she was convinced that the medication wasn’t agreeing with her body. She decided to act against doctors recommendations and to trust her body and try her way without the medications.

She continued to work with her diet, and within a month her TSH went down to 9 mIU/mL. A TSH under 10 mIU/mL is considered “subclinical hypothyroidism”  and is considered a gray area for treatment by most endocrinologists.

She continued to work on her health and found and contacted one of the only functional medicine doctors in Denmark. He prescribed a high dose of vitamin C with titanium and copper which has shown to have a positive effect on T4 levels. Since she already had successfully reduced her TSH without any medications, he encouraged her to keep up the good work and offered to monitor her condition and prescribe Armour if needed.

Dorthea also had a hair mineral analysis that found she was deficient in all minerals except calcium and began to replenish her nutrients.

At that point, Dorthea was determined to get her health back. “You can say I became obsessed.” She started to investigate even further and experiment on herself. She was able to find resources online and stumbled on information about the role of food in Hashimoto’s.

She figured out that exercise was stressing her body more, and that the low-calorie diet she had followed to try to lose weight put her in starvation mode, causing her body to store fat instead of burning it.

She started a personalized autoimmune Paleo diet in May 2013. This diet is grain, dairy, soy, nightshade and goitrogen free. She also had allergy testing that confirmed she was sensitive to nightshades and dairy. Dorthea gave up her vegetarian diet and began to eat fish and grass fed free range poultry (no red meats) and of course with a lot of vegetables within her limits – No more calorie counting! She lost 10 pounds and 3 inches off her waist in 2 months without trying, and her energy started to get better and better every day. Encouraged, she continued working on her health.

She identified that stress made her feel worse. She can even feel her neck swelling when she is stressed. She began to tackle her stress through meditating and mindfulness, keeping a journal and taking slow walks in the forest close to her home, enjoying nature’s healing.

Her TPO antibodies dropped from close to 6000 kU/L to 500 kU/L (yes that’s over six thousand to five hundred, >90% of her antibodies disappeared!)  over the course of 6 months. Her TSH further dropped to 3 mIU/mL, and her T3 is at the higher end of the normal range (good for weight loss and well-being).

In recent years, The National Academy of Clinical Biochemists indicated that 95% of individuals without thyroid disease have TSH concentrations below 2.5 mIU/mL, and a new normal reference range was defined by the American College of Clinical Endocrinologists to be between 0.3- 3.0 mIU/mL, so a TSH of 3.0 mIU/mL would be considered “normal” by most standards.

Dorthea continues to eat a modified autoimmune Paleo diet and still reacts to broccoli and kale, but finds herself with more and more energy, is losing weight (currently down a total of 16 lbs and reduced her waist by 4.5 inches) and her paralyzing social phobia has lifted. She is still socially sensitive, and big crowds and shopping malls are not her scenes, but she is ok with that.  She has come to appreciate herself and accepts that she is someone who is extra sensitive and it’s fine with her 😉

She hopes that she can use her experience to help others and would like to start a Danish language blog and /or internet consultations for people with Hashimoto’s and other autoimmune conditions in Denmark using her education, experience, and current research.

“It’s very important to educate yourself. You can’t trust that your doctor will know best.”

“You have to be willing to change.”

“It is vital that you see your body as your friend, who ‘screams’ at you for help, instead of seeing it doing battle against you.”

“Trust your body – our bodies aren’t designed to lie. I never liked dairy as a child and didn’t realize until I eliminated it how much better I felt off it. It took me 47 years to figure out what I knew as a baby!”

“It’s a journey, and it’s not an easy one, but you are not alone, and you CAN feel better.”

A note about anxiety: Anxiety and phobias are something that we don’t typically connect to thyroid disease, but can play a significant role in Hashimoto’s. When we have a lot of antibodies, this causes a rapid breakdown of thyroid cells and a rush of thyroid hormones into our circulation causing a transient hyperthyroidism.

Before I was diagnosed, I remember thinking that I was dying or that there was something seriously wrong with me. I wondered if I had a new-onset anxiety disorder and found myself less social and more withdrawn. In retrospect, the biggest change was that I became really unsure of myself in social and work situations, excessively worrying about what others thought of me. This was a huge change from the confident, outspoken young woman I had always been, and have become again after reducing the attack on my thyroid. I want to let all of you know that this feeling doesn’t have to be the new you and there are plenty of things you can do to get better. I hope that Dorthea’s story inspires you.

Disclosure: As an Amazon Associate I earn from qualifying purchases. We are a professional review site that receives compensation from the companies whose products we review. We test each product thoroughly and give high marks to only the very best. We are independently owned and the opinions expressed here are our own.