Irritability and Anxiety Are Common Symptoms of Hyperthyroidism 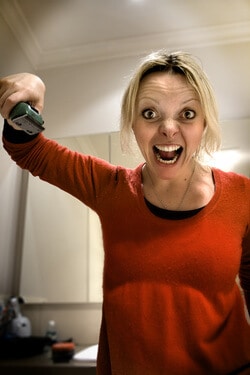 I wanted to take time out to write this post as I’ve been getting quite a few questions regarding the connection between Hashimoto’s and mood.

Some people have asked if their depression or anxiety or irritability could be related to Hashimoto’s and my answer is: Absolutely!

When the thyroid is attacked by the immune system, this results in thyroid cell breakdown.  The hormone that is normally stored in the cells gets rapidly released into the blood stream causing a transient hyperthyroidism known as thyrotoxicosis or Hashitoxicosis (yes a real word)!

Irritability and anxiety are common symptoms of hyperthyroidism.

Once the extra hormone gets cleared out a resulting hypothyroidism with the symptoms of apathy and depression can result. Check out my blog post titled Symptoms of Impaired Thyroid Function for common symptoms of both. 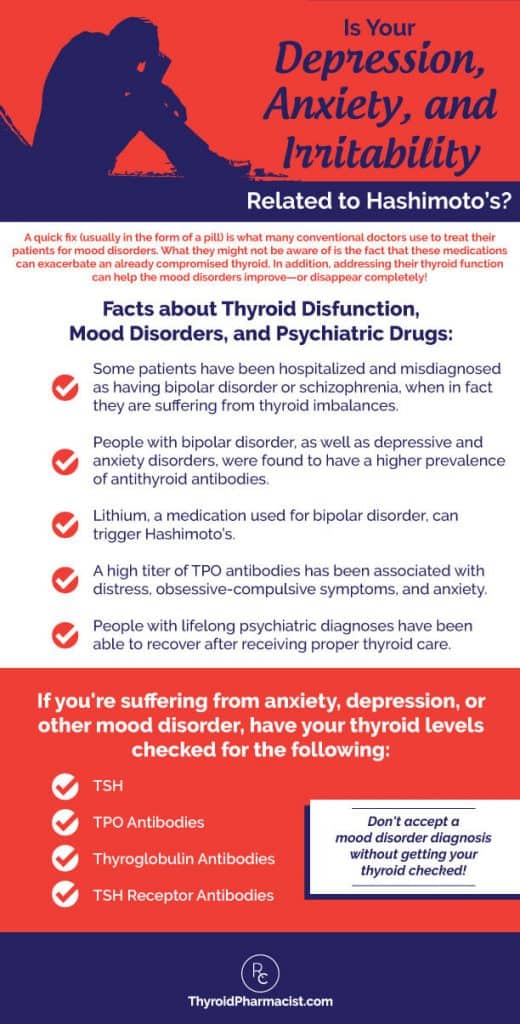 As many thyroid symptoms are very non-specific, they are often disregarded by the medical community in the initial stages. Patients are dismissed with having depression, stress or anxiety. Thyroid patients are prescribed anti-depressants or anti-anxiety medications without consideration of thyroid function.

Medical studies have shown that up to one-third of people who fail antidepressants report feeling better once started on Cytomel® (a T3, thyroid hormone).(1) Some patients have even been hospitalized and misdiagnosed as having bipolar disorder or schizophrenia when in fact they were suffering from thyroid imbalances.

Additionally, people with bipolar disorder as well as depressive and anxiety disorders were found to have a higher prevalence of anti-thyroid antibodies.(1) To further complicate the issue, lithium, a medication used for bipolar disorder can trigger Hashimoto’s. (3)

High titer of TPO antibodies has been associated with distress, obsessive-compulsive symptoms, and anxiety (1). This is likely as a result of increased amount of thyroid hormone being rushed into the bloodstream causing a transient hyperthyroidism, anyone who has experienced symptoms of hyperthyroidism can describe how terrible this feels. People with anxiety, depression or other mood disorder should have their thyroid function checked, especially TSH, TPO Antibodies and Thyroglobulin Antibodies and TSH receptor antibodies. People with lifelong psychiatric diagnoses have been able to recover after receiving proper thyroid care (2). 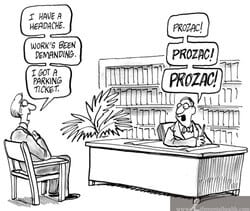 From my personal experience…

During my work as a consultant pharmacist, I saw quite a few patients who were hospitalized for psychosis later to be found to be suffering from hyperthyroidism and a patient who was found to have under-treated hypothyroidism after being hospitalized for treatment-resistant depression.

From my personal experience, Hashi’s made me feel like I was going crazy! I would wake up at night alarmed every time my husband would cough, move or turn over. During the day I felt panicky and thought the world was ending, that everyone was against me and nearly jumped out of my seat if someone came to my office at work and surprised me! I was extremely anxious, jittery, emotional and irritable!  This was new to me…I used to be mellow and laid back and slept like a log every night for most of my life. Working in mental health, I wondered if something was seriously wrong with me or if I had developed a new onset panic disorder.

I went to the doctor, describing my symptoms and asked for a complete physical, instead, I was offered…you guessed it Prozac!  While Prozac has helped millions of people with depression, OCD, and other conditions, as a pharmacist, I am a big proponent of appropriate medication use and believe organic causes need to be explored first, so I continued on my quest with another doctor.

Shortly after, I learned that my TPO antibodies were in the 2000 range (normal is usually <30)! After starting thyroid medications, taking Selenium, and balancing my blood sugar, my anxiety started to stabilize. Over the course of two years I made additional changes to my diet and supplement regimen, and now I’m the old me once again, cool as a cucumber 🙂 I won’t get started on the diet issue in relation to mood today (I would be here all night) but will talk more about it in future posts.

Hope that helps, and know that there is hope for feeling better!